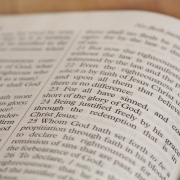 A week from tomorrow [November 3, 2020] are elections in the United States, including for president.  Yet unfortunately, the root cause of all the problems within the nation seems to have been completely ignored.  The problems of the world or this nation will not be solved by electing one party over another unless this issue is proclaimed from the rooftops.  The fact of the matter is we have a moral problem. We have a sin problem.  And we have rebelled against God.

General Douglas MacArthur said in a speech back in 1951 the following:

“In this day of gathering storms, as the moral deterioration of political power spreads its growing infection, it is essential that every spiritual force be mobilized to defend and preserve the religious base upon which this nation was founded.  For it is that base which has been the motivating impulse to our moral and national growth.  History fails to record a single precedent in which nations subject to moral decay have not passed into political and economic decline.  There has been either a spiritual reawakening to overcome the moral lapse, or a progressive deterioration leading to ultimate national disaster.”

Today, our president is once again campaigning with the same “make America great again” rhetoric.  Yet he addresses every aspect of becoming a great nation again while seemingly ignoring this moral fabric, which underlines our decline.  No longer does our nation have a fear of Almighty God, which was the real reason God blessed America and made it into a great nation in the first place.  Dr. Martin Luther King Jr. once said,

Should the church, the President, and both of our major political parties continue to ignore and avoid this fact, the United States of America will ultimately disintegrate — perhaps very soon and suddenly.  A great spiritual battle is going on for our nation, yet even those who seemingly are on the correct side of the battle fail to recognize it as such.  Unless our leaders identify the root of our problems as moral failings, we are likely doomed to oblivion.  It matters not if Donald Trump or Joe Biden is elected president; we are still headed toward the same cliff.  One is merely taking us there faster than the other.

William Booth, founder of the Salvation Army, said in 1900,

“I consider that the chief dangers which confront the coming century will be religion without the Holy Ghost, Christianity without regeneration, politics without God, and heaven without hell.”

This is just as true in the 21st century as it was in the 20th century.  Only it seems in great part our nation has already fallen over the precipice.

It is so easy to get caught up in the “make America great again” political efforts, but that will fail unless President Trump and our nation’s leaders, and most importantly, our church leaders, recognize this as the spiritual battle that it is, and call this nation to repentance.

For those of us as part of the remnant, we must too repent on behalf of ourselves and the sins of our nation.  The devil and his demonic influence now have infested so many parts of our society with his deception and lies.  Jesus said some of these demons do not come out but through fasting and prayer.  I therefore encourage you to do two things:

First, fast and pray for revival in this nation, that the strongholds of Satan will be cast down.

Second, contact President Trump, your senators, and your representative and tell them America will never be great again unless they address the spiritual condition of our nation, that without a moral underpinning and fear of Almighty God we are doomed to failure like has happened to every great society in history that has abandoned its moral fiber.

May God bring revival once again in America!