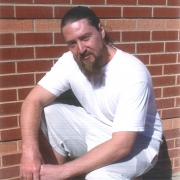 I am writing you this letter to specifically introduce you to Will Flournoy. Will is a fellow inmate who lives in my dorm at Ashland Federal Correctional Institute.

Last week, God miraculously, through the Holy Spirit, brought Will to a place of repentance, and he was born again. This change has been remarkable, Jesus Christ has radically changed him, and he has been genuinely redeemed by the blood of Christ.

Will is being released from prison on July 11, after having served a six-year sentence. Because of a lifetime of drug addiction, he would like to immediately enter an Adult Teen Challenge residential rehabilitation program. It is a one year to fifteen-month faith-based program, and he meets all the criteria, but doesn’t have the $3,000 entrance fee.

I would like to encourage you to help Will cover this cost. The 419 Fund will collect the funds and send them directly to Teen Challenge in Will’s city.

I am very enthused about Will’s future, as he is eagerly sharing with everyone what God has done in his life. Your investment in his future in this way will yield immense returns for the kingdom of God. Thank you for prayerfully considering this.

My name is William Flournoy, and for most of my life I’ve been missing something. That something is purpose. From so far back as I can remember, I felt the need to fill this void in my life but didn’t know how. Like a lot of young people, I started using drugs to help fit in and, like most people, became a slave to addiction.

It started off with marijuana and soon escalated to harder drugs like cocaine and meth. I thought the drugs would fill that void in my heart and would eventually lead to me finding purpose in what was becoming a chaotic life that I thought at the time was normal. How wrong I was!

The use of drugs eventually led to the distribution of drugs, which finally led to incarceration. Receiving an 84-month sentence was a reality check for me at the age of 31 and caused me to re-evaluate my life. But as much as you would think prison is intended to rehabilitate a person, the harsh reality is that most of the time people don’t learn their lesson and even become worse from their time in prison. I continued to use drugs in prison and kept getting in trouble, all the while thinking that I can stop on my own whenever I want and will eventually quit before I get released. How powerless I was and didn’t even realize it.

I had grown up in a somewhat religious family who made my brother and I go to Sunday school every week, but eventually I lost touch with religion because at the time I was rebellious and just went through the motions. When I’d first entered prison, I started going to the church services with some friends and attended Bible study because I felt that there was some truth to what they were telling me about Christ. I felt the need to seek some type of understanding from the Bible that so many of my friends seemed to have at the time. They would tell me what it took to be born again and with that a transformation would occur, but I was always on the fence with my belief. You can say that I had doubt like Thomas did. I couldn’t see myself giving up certain things that I did in my life that were considered a sin in the Bible – like using drugs and lusting after women.

I eventually left that prison and went to a lower custody prison, where I stopped going to church and continued to use drugs. I also continued to get in trouble because of it and eventually reached a point of desperation and found myself praying to God. I asked for him to help and promised to change my life if He would, which He miraculously did in a matter of hours. Not only did He answer my prayer, but I felt like He gave me the strength to overcome my drug addiction and felt like I knew what it would take to get out and stay out of prison.

I had this overwhelming feeling that I was experiencing that felt better than any drug I’ve ever done, and it wasn’t going away. I started hearing the Lord speak to me in everything around me and felt like He was directing me to something. Then one day, I was led to speak with a man about my new thoughts and how I was feeling. When I told this man that I couldn’t understand why I was feeling like I was high, this man said it sounded like I had the Holy Spirit working in me. This man, whom I believe is a messenger sent from God, is Philip Zodhiates.

Things started making more sense after that, and I started hearing God speak to me in so many ways. I was invited to a church service and immediately decided to go. Something was calling me to that service.

On March 15th, 2020, at the age of 37, I accepted Jesus Christ as my Lord and Savior, came to surrender all my burdens at the foot of the cross, and repented of all my sins!

I felt the Holy Spirit pour out into my heart and soul and fill every fiber of my body. I made the decision to live my life for Christ from that day forward, and now I feel conviction in the way I have sinned my whole life. I have started hanging out with my new friend, who is my brother in Christ. He is my guardian angel. Since we’ve started spending time together, we have done lots of praying and studying together, and I feel like he is strengthening my faith through the understanding of the Bible.

He had mentioned there is a program called Teen Challenge that I would probably enjoy going to since I have no place to go when I get out. I called and talked to the intake coordinator about the program, and it sounds so awesome. It’s a 12-15-month faith-based recovery program and I meet all the requirements – except I am going to have some trouble coming up with the $2,500 intake fee that is needed upon arrival. I would be grateful for any help I can get. Thank you!