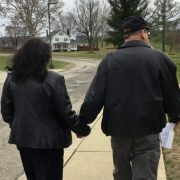 Dear one in Christ,

I praise the Lord for His love and His sovereign working all things together for HIS Glory!  We serve an amazing and awesome Lord, and I never cease to be overwhelmed by His grace, mercy, and love and the way He works everything together for good.

Today was a milestone of sorts. We were very surprised to be suddenly told we could go outside for 1 1/2 hours this morning to the recreation yard. This was the first time in two months most of us were able to breathe fresh, outside air!

Even though it was quite cold (we were thankful to have been told to take coats), it was extremely invigorating and boosted everyone’s spirits. I was glad to be able to walk the entire time, probably at least 5 miles, and work off some of the excess calories from the unbalanced diet and lying around for the past two months. Often, I opt in the chow hall for meatless options, but as long as they’ve been delivering meals to the units with lots more sugars and refined starches, we’ve not had that option. Plus, we are only getting one hot meal a day; the others being cereal and sandwiches.

Another unit was cleared out to make room for Unicor workers, who are basically the long-term government slave laborers, so they could find a way to get them back to work. About 12 from that unit came to our unit, and about eight of them are believers! I am just now meeting them all, although one has started studying the Bible with me, Will and Richard every evening. That means there are now at least 13 true believers in our unit if all of the eight new guys turn out to be genuine. Before we had become confined to our cells, our nightly prayer group had dwindled to about five because of guys going home or to another facility. Nine of us crammed together last night into a 7’x 9’ cell to pray and study.

Thank you everybody who donated to send Will to Teen Challenge. He is so very thrilled and anxious to be going. He has to first have hernia surgery when he is released in July. He is thrilled now he does not need to come up with the intake fee. He continues to grow in the Lord!

My paralegal “jailhouse lawyer” is now working on what, God-willing, is my final response for Judge Arcara, my sentencing judge. The answers from my attorneys and prosecutors in response to the judge’s specific questions have been elusive, misleading and contained outright lies! They have attempted to “muddy the waters” by bringing into the debate peripheral issues, which have nothing to do with my main contentions – that I was never explained or told of the statute 1204(c)(2) affirmative defense allowing Lisa Miller to remove her child from the country if they were fleeing a pattern of abuse and that the jury was denied the opportunity to learn of the alleged abuse, and to determine if the abuse Isabella was enduring was my motive in giving Lisa Miller and her daughter a ride to Buffalo, New York. All other issues are irrelevant!

The Wuhan virus scare has caused everything to be delayed, which, aside from delaying my ultimate release, may be a good thing, as it has delayed the civil trial and discovery.  I have asked for another extension in selecting a new Vermont lawyer. We are all locked in our respective units, so I cannot confer as to the drafting of my response, but I am confident it is in God’s hands. The deadline for this response is now May 21.  Please pray!

I did apply to be released under the CARES Act to home confinement, but it was denied by the warden, H. Allen Beard.  His reasoning was because he claimed the program statement on inmate discipline and special housing units lists International Parental Kidnapping specifically as a crime of violence and “other policies or programs indicate that an inmate COULD (my emphasis) be denied the benefits of such programs.” Therefore, I am a violent offender and for this reason he has chosen to deny me.  I write more about this at www.romanseight28.com.

Yet today, I learned that the largest cocaine trafficking king pen in the United States has been released from this prison because of COVID-19. This is disheartening, but supposedly he paid over $1 million to a DC attorney to “get him out” under the CARES Act. But I know God is ultimately in control, and He may choose to use me here a little while longer. But the worst part of the way things are now is that we are being denied any visits. I haven’t seen Kathie in over two months, and they say it won’t be until later this year when they open back up visitation. So please pray God works on Judge Arcara’s heart to rule in my favor, vacating my sentence, and that the government doesn’t retry me. Thank you again for all of your prayers, letters and support, on behalf of both Kathie and me. This has been especially difficult on my wonderful wife, Kathie, who is so grateful for all you’ve done. She says you all are such a blessing to her.

I Peter 5:10: But the God of all grace, who has called us unto His eternal glory by Christ Jesus, after you have suffered awhile, make you perfect, establish, strengthen, settle you.