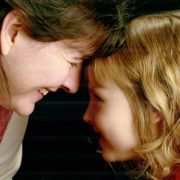 “The Family court concluded that the long-term benefits of the change in custody would outweigh any short-term disruptions to [Isabella].” Vermont Supreme Court Docket No. 2009-473.

The change of custody would be from a birth mother, who had become born again and was raising her daughter according to Biblical principles, to a former same-sex partner.

What long-term benefits? All I can see are long-term disruptions and dysfunction added to an already traumatized child. After visits with Janet Jenkins, Isabella wet the bed, wanted to cut herself, talked about suicide and acted out.

Jenkins had not seen Isabella for 2 years prior to the Vermont ordered visitation starting. Isabella would come home and ask if she could stop seeing Jenkins.

Isabella was born in Virginia and had spent all but 17 months of her 7 years in the Commonwealth of Virginia. The Court in Virginia gave jurisdiction to Vermont, and the Court in Vermont ruled that Isabella had 2 mommies.

Lisa fled the country to seek a safe place to raise Isabella far from the reach of the gay lobby.

Philip Zodhiates has been tried and convicted of helping Lisa. He will spend 3 years in federal prison unless we can secure a pardon from President Trump.

What you can do:

Print front to back on card stock (colorful would be great!).

I want to personally thank everyone who has donated to Philip. He and Kathie are the most godly couple I have ever met and they don’t deserve what is happening to them. BUT GOD WILL GET THE GLORY AND HAVE THE VICTORY IN THIS SITUATION!

“Stones of the Bible” Jewelry