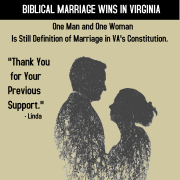 When I set out a year ago to stop the “Fake Marriage” Amendment, it was a bit like David going after Goliath.

The “LGBT” cult is powerful and well financed. They had spent two years working to have the Biblical definition of marriage removed from the Constitution of Virginia and replace God’s Word with their abominable definition

My mission was divided into two sections. The first nine months were spent helping defeat six democrats in the House of Delegates. Defeating the “LGBT” amendment would require that conservatives win control of the House in November 2021.

The next five months of work behind the scenes with legislators ended in victory when six members of a subcommittee in the House of Delegates voted against the fake marriage amendment.

Praise God! Marriage is still one man and one woman.

Again, thank you for your support.