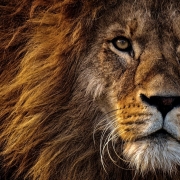 As I read through the book of Ezra this morning, I had to contemplate as well on the book and life of Daniel, who was in service to King Cyrus, the Persian king who issued a decree to allow the first group of Jewish exiles to return to Jerusalem with an official edict to rebuild the temple. Nebuchadnezzar and the Babylonians had destroyed it 70 years prior.

Apparently, Daniel dated his prophecy the year the first group of exiles returned to Jerusalem.

After returning to Jerusalem, this first group of three who ultimately returned from exile (the second and the third being led by Ezra and Nehemiah, respectively), met opposition from local adversaries who wrote to King Artexerxes, the new king of Persia, to stir up trouble and force the Jewish exiles to cease from their work of rebuilding the temple, and consequently ordered the work to stop.

But then Darius became king, who Daniel also served. And so Zerubabel and Jeshua began again to rebuild the temple. Ezra says nothing about Daniel, but I have to wonder if perhaps their knowledge of Daniel’s authority in Darius’ government had something to do with their defiance against Artexerxes’ decree to stop the construction. And so, the adversaries of Judah complained again, this time to King Darius.

But Darius had decided to get to the bottom of the matter, and after a thorough search found the decree of Cyrus the exiles had claimed gave them the right to rebuild. Darius found it and ordered and supported the completion of the rebuilding of the temple, leading to the second wave of exiles being able to return.

Now, in reading all of this, and the fact that the book of Ezra begins, “Now, in the first year of Cyrus, king of Persia, in order to fulfill the word of the Lord by the mouth of Jeremiah, the Lord stirred up the spirit of Cyrus, king of Persia, so that he sent a proclamation throughout all his kingdom, and also put it in writing, saying, ‘Thus says Cyrus, king of Persia, “The Lord, the God of heaven, has given me all the kingdoms of the earth, and He has appointed me to build Him a house in Jerusalem, which is in Judah…”’” Daniel 6:28 says, “So this Daniel enjoyed success in the reign of Darius and in the reign of Cyrus, the Persian.” Both of these kings, along with Artexerxes, were responsible for the return of the exiles of Jerusalem to their homeland after 70 years in exile.

Surely these three men know God’s deliverance of Daniel’s friends when Nebuchadnezzar had them thrown into the fiery furnace. And it was Darius himself who reluctantly dropped Daniel into the den of hungry lions, only to be miraculously delivered by God Almighty. The testimony of these four men had an undeniable impact on these four kings who demanded they be worshipped as a deity.

God uses people who refuse to compromise His Word and his authority to move the hearts of kings and help redeem His people from bondage that holds them captive!

Certainly, God could have used someone other than Daniel, and He could have moved on the hearts of these kings without Daniel’s testimony. But we are told the account of Daniel, I believe, to help us to recognize even today the impact a life of one who refuses to compromise can have on even an entire nation and the rulers of those who are your vowed enemies.

Still no word from Judge Arcara in Buffalo, so please don’t stop praying!

Message from Isaiah
Scroll to top