Caught In a Storm – By Max Lucado

Chippie the Parakeet, never saw it coming. One second he was peacefully perched in his cage. The next he was sucked in, washed up, and blown over.

The problem began when Chippie’s owner decided to clean Chippie’s cage with a vacuum cleaner. She removed the attachment from the end of the hose and stuck it in the cage. The phone rang, and she turned to pick it up. She’d barely said ‘hello’ when ‘sssopp!’ Chippie got sucked in. The bird owner gasped, put down the phone, turned off the vacuum, and opened the bag. There was Chippie – still alive, but stunned.

Sucked in, washed up, and blown over . . . that’s enough to steal the song from the stoutest heart.

Can you relate to Chippie? Most of us can. One minute you’re seated in familiar territory with a song on your lips . . . then the doctor calls. The divorce papers are delivered. The check bounces. A policeman knocks on your door . . .

If Chippie’s story is your story, then I’m glad you [are reading this article]. I wrote it with you in mind. I wrote in because there is a day in the life of Christ that you need to know about.

Aside from the Crucifixion, it is the most stressful day in his life. A roaring sequence of bad news, demanding crowds, and doubting friends. Twenty-four hours in which Jesus faces the same gale-force fears that you and I face. Waves of pressure slam. Winds of anxiety blow. Clouds of darkness billow. 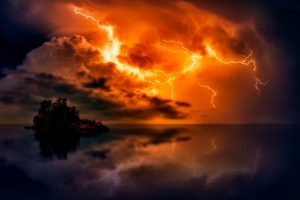 “Yet through it all Jesus remains calm. He endures the day without losing his song. Although the people pressed and the problems monsooned, Jesus didn’t blow up or bail out. In fact, He did just the opposite. He served people, thanked God, and made cool-headed decisions . . .”

– Max Lucado, In the Eye of the Storm

Okay, okay – I know what you are thinking – “But, I’m not Jesus! How can I respond like Jesus?”

Go to God’s Word – seek His wisdom in the midst of the storm and stand on His promises:

Philippians 4:6-7, “Be anxious for nothing, but in everything, by prayer and supplication with thanksgiving, let your requests be made unto God. And the peace of God which passes all understanding, shall keep your hearts and minds through Christ Jesus.”

God is there in the midst of your storm – any storm!