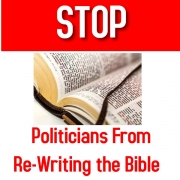 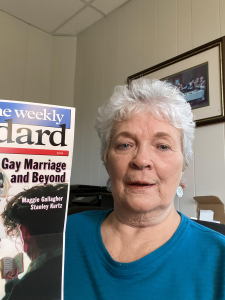 I have sixty (60) days to deliver a message of “TRUTH” to stop politicians from re-writing God’s definition of marriage into language that allows anyone to marry anyone or anything and more than one at a time.

During this 2022 General Assembly, SJ5 will be introduced and if it passed could become part of the Constitution of Virginia negating our original Marriage Amendment passed by the Virginia voters in 2006 and would become a precedent for all states to follow.

You and I can stop this from happening. Let’s stop it at the legislative level.

After Jesus set me free from the sin of homosexuality, I spent several years researching the topic. I couldn’t understand how a Christian girl who had been raised in church her whole life fell into the trap. I needed answers.

During that search for answers, I discovered that the entire “sexual orientation movement” had been built upon lies upon lies, overblown statistics, cover-ups, and deliberate misinformation.  I want to get the truth out.

Will you help me by donating to my Missionary journey where I will deliver truth to the Delegates and Senators of Virginia in an effort to stop them from rewriting the Bible?

Jesus said, “Ye shall know the truth and the truth shall make you free.”

Politicians through SJ5, want to make marriage a ‘fundamental’ right. Marriage is not a fundamental right. Marriage is a Covenant created by the Living God. It is between one man and one woman. It is the Word of God and no politician has the authority to re-write the Bible.

Your financial support will help with printing of materials of truth for 140 legislators and food and lodging while staying in Richmond.

Thank you for your support.

Here is the full language of the proposed amendment:

Proposing an amendment to Section 15-A of Article I of the Constitution of Virginia, relating to marriage; repeal of same-sex marriage prohibition; affirmative right to marry.

Referred to Committee on Privileges and Elections

WHEREAS, a proposed amendment to the Constitution of Virginia, hereinafter set forth, was agreed to by a majority of the members elected to each of the two houses of the General Assembly at the special session I of 2021 and referred to this, the next regular session held after the 2021 general election of members of the House of Delegates, as required by the Constitution of Virginia; now, therefore, be it

Amend Section 15-A of Article I of the Constitution of Virginia as follows:

That only a union between one man and one woman may be a marriage valid in or recognized by this Commonwealth and its political subdivisions the right to marry is a fundamental right, inherent in the liberty of persons, and marriage is one of the vital personal rights essential to the orderly pursuit of happiness.

This Commonwealth and its political subdivisions shall not create or recognize a legal status for relationships of unmarried individuals that intends to approximate the design, qualities, significance, or effects of marriage. Nor shall this Commonwealth or its political subdivisions create or recognize another union, partnership, or other legal status to which is assigned the rights, benefits, obligations, qualities, or effects of marriage and agents shall issue marriage licenses, recognize marriages, and treat all marriages equally under the law regardless of the sex or gender of the parties to the marriage.

Religious organizations and clergy acting in their religious capacity shall have the right to refuse to perform any marriage.